I find myself frustrated by the issue of recycling here! It is not very well addressed in the USA, well, at least not here in north Texas; I don’t see much in the way of active recycling by anyone, businesses included. Recycling is not promoted like it is in Australia, where recycling is not only encouraged, but is aided through incentives like government provision of household recycling bins, regular collection of recyclable materials and recycling bins provided in public areas. On the whole, I think Aussies are more conscious of, better educated and more active in the process of recycling. 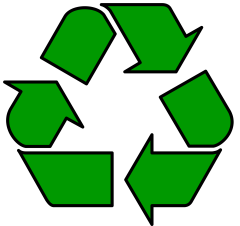 There is no recycling whatsoever in the city where we live (at least, none that I have seen) and there is so much to recycle, especially since everyone drinks bottled water here (town tap water tastes filthy – not so good). And it’s a good thing that it is cheap (~$4 for 24 500ml bottles)! We also use bottled water for cooking, etc. Therefore, we go through dozens of plastic water bottles each week. So along with aluminium cans, cardboard and paper etc., we produce more recyclable waste than regular rubbish (trash).

In addition, something that really needs to be addressed is the overuse of plastic shopping bags here. When you go to a supermarket, you often get only 1 to maybe 3 items per bag (they are so thin, they won’t hold more) and often your items are double bagged (or even triple bagged) – it is ridiculous how many bags are wasted. So many end up as litter, strewn around the shopping centres, on roadways, wound around power poles and fences, etc. It looks awful! Reusable shopping bags, which are widely used in Australia are not very common, particularly away from the major cities. Dallas city has only just started requiring businesses to charge 5 cents for each plastic bag issued to consumers. This was done chiefly to address the pollution issue, but hopefully it will encourage people to think more about recycling and using reusable shopping bags.

Keep recycling people (and if you don’t yet, make the effort to try it) and make the world a cleaner, more environmentally friendly place to live! 🙂