So, I just got back from some time spent in Des Moines – capital of Iowa and thought I might share some of my experiences and tell you all about Des Moines! It’s a nice city, by the way and what I immediately noticed about Iowa was – there are lots of corn fields 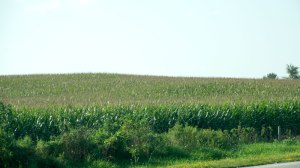 – and it is much greener than Texas.

My friend Becky Goldsmith (quilter extraordinaire) had a working gig in Des Moines doing some teaching, a book signing and attending a quilters guild meeting for a few days and she let me tag along with her. When she wasn’t working we shared some sightseeing, and when she was – I did some exploring on my own.

Together we went to the Iowa State Fair on Saturday afternoon – and had a great time.

Crowds at the State Fair

On Sunday afternoon, whilst Becky was teaching, I explored Des Moines city. I looked around the Capitol building (being a Sunday it wasn’t opened – so just looked from the outside), looked at a few of the other monuments

and drove around exploring downtown and the river area. I was grateful to see and experience another American city. 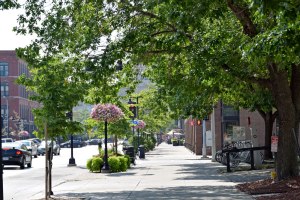 One of the main streets in downtown Des Moines

One of the many bridges crossing the river

Some great art work on the side of a building

A delightful garden in the middle of the city

Monday saw us both touring the Capitol building and then later in the afternoon, I explored the Des Moines Botanical Gardens on my own. See my next post for more on this!

Anyway – Go and see Iowa and Des Moines if ever you get the chance! 🙂