We have seen and done so much in our first week in Ireland.

Yesterday (was, it only yesterday) before we departed Derry we walked the city’s walls.

This was really worth the effort and I’m glad we did this even though it had not been on my ‘must do’ list. Derry was a very pretty town and I really enjoyed it. Of course, I could have done with an extra night there, but that is always the way!

From Derry we drove to Letterkenny where there is a most beautiful cathedral – St. Eunan’s. This Neo-Gothic building is absolutely gorgeous with some excellent celtic stone work, lovely vibrant stained glass windows and a vaulted ceiling that is very grand. The cathedral also boasts a 65m steeple. I am so glad we stopped here! 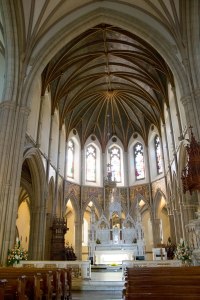 After our quick stop at Letterkenny we took the coastal route along the part of the “Wild Atlantic Way” road. Yet more spectacular scenery – we called in at Horn Head (and the pretty little town of Dunfanaghy) and drove through The Rosses (an area with more than 100 lakes).

driving through The Rosses

This was a lot of driving through narrow, winding, country roads. I didn’t see as much as I would have liked since we didn’t leave Derry until midday; we spent quite a few hours in the car, not arriving at Lough Eske (Donegal) until just after 6pm.

Lough Eske Castle is very nice! This place was a ruin until 2006 when it was rescued and given a new life as a hotel.

Today, we took a look around Donegal town and took a tour through the castle, which is pretty much in the middle of town. Although, not particularly old as far as Irish castles go, it was still interesting.

After the visit to the castle, we drove some more of the Wild Atlantic Way – to Killybegs (a little town, with a big fishing port), and then on to Glencolmcille – the Glen of St Colmcille (had to visit here just because of it’s association with said saint – AKA St Columba), but this is one of the prettiest valley’s I’ve seen.

On our way back to Lough Eske Castle, we called in to visit Slieve League (one of the highest cliff faces in Europe) – it is very spectacular! However, it was quite a walk out to the cliffs (about a 6km round trip) – we didn’t realise that it was possible to drive right to the top as there was a carpark at the bottom and it was gated, so we assumed you had to walk (until we saw cars coming back down). Oh well, we got our exercise in for today!

1 thought on “Derry to Donegal Town”