Sadly we had to say farewell to County Kerry too soon and left with sights unseen and adventures missed! There is so much to do in this area – a week would have been lovely!From Kilarney we headed to Cork taking the longer coastal route, stopping at Buntray House (home of the White family [my maiden name] ,the former earls of Bantry since 1739) and gardens overlooking Bantry Bay. This is a magnificent house (no photography inside the house unfortunately) and is still privately owned (it also acts as a B&B).

Before heading on to Cork, I had to stop in at Drombeg Stone Circle, dating from the 2nd century BC. 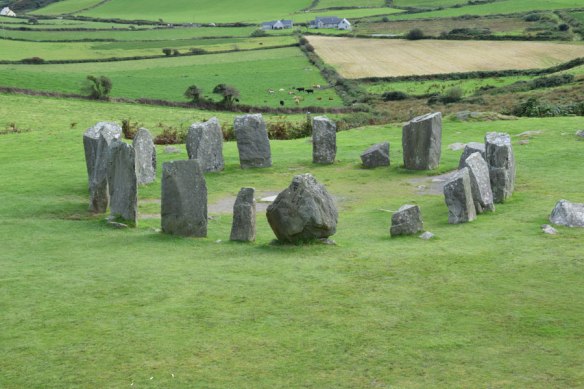 I must admit I did not really like Cork, it appeared a hard and dirty city; it certainly wasn’t quaint and charming. The following morning we headed for Blarney to visit the castle. This was so much more than I expected.

Besides the castle (and of course, the Blarney Stone, which I did not kiss!) there is a rather large manor house and some rather extensive gardens; one of which was called Rock Close (a hidden grove of ancient Yew trees and limestone rock formations) – this  was a magical wonderland where ivy grew over trees, tree roots were twisted, the moss covered the trees and the rocks, and where there were waterfalls and hidden caves, the Witch’s steps, the Witch’s kitchen and the Druid’s cave. For me, this was wonderland and I could have stayed here for hours! 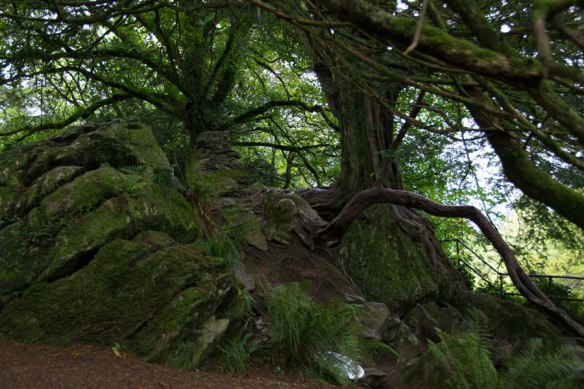 We did experience a bit of rain at Blarney castle, but quite a good deal more as we made our way to Cobh, which was going to be our next stop. As is was totally miserable here, we didn’t stay and pushed on, calling in at the Old Midleton Distillery (Ireland’s largest distillery) for a quick visit before making our way to Waterford (Ireland’s oldest city) where we stayed overnight at the Waterford Marina Hotel (a great value hotel and I would recommend it).

I liked Waterford (and again, I could have stayed longer). Our first stop in Waterford was Waterford Crystal where we did a tour of the factory. This was very informative and I enjoyed it, but it was pricey at 13euro each, although I now have a great appreciation for the craftsmanship that goes into creating these pieces of art – by the way – there are no seconds at Waterford Crystal- any imperfect pieces are scrapped! I couldn’t afford to buy anything here, but I did admire all that was on offer, including The Barclays trophy with Jason Day’s name on it, The Ashes Cup and the People’s Choice Awards Trophies. Of course, I particularly admired the crystal harp on display!

Just down the street we took a look at Reginald’s Tower (a stone tower dating from the 12th century, this is the oldest civic urban building in Ireland).

We also took a look at the ruins of the 13th century Grey Friars church and Christchurch Cathedral (built in 1770). Before leaving Waterford I happened to find my street and took a photo:

– and then headed to Kilkenny.

However, once again, we didn’t take the most direct route; I had to go via The Rock of Cashel! What an impressive and imposing structure. Once again – I loved what I saw here. 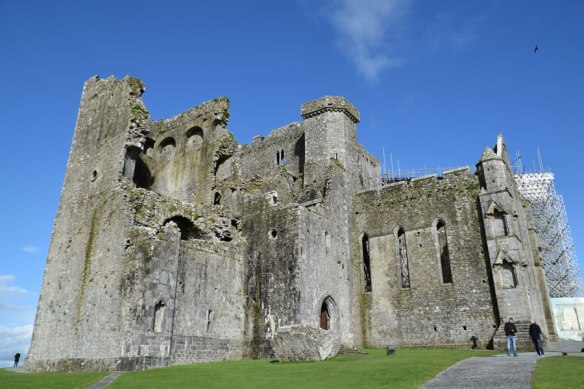 The views from this former fortress and monastery are also impressive.

To cap off my day – we finished up in a hotel bar (Langtons House Hotel) – old and beautiful, having dinner and a few drinks listening to some live Irish music. For me; I was feeling a bit like ‘a pig in mud’, very happy! 😊

I tried to upload this yesterday, but had trouble with Wi-Fi!

2 thoughts on “Cork and Waterford”